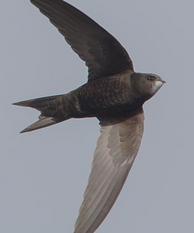 Over the last two years efforts have been underway in the village to help combat the alarming decline in the number of these remarkable birds. It is inspiring to see swifts, which never leave the air other than to nest, returning from their long flight from Africa to the place where they raised young the previous year. Their dramatic flight and very audible screaming are one of the delights of spring and early summer.

Our litter pick in October saw several volunteers out and about, clearing the village of litter. 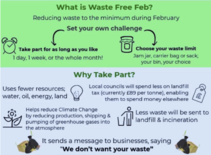 The swifts are back!

Wiltshire Council are asking you to make changes and play your part in making big changes to the environment.  The Wiltshire Green Pledge is a simple online tool to encourage people to commit to doing what they can to be as environmentally friendly as possible.  You can pledge whatever you want from leaving the car at home more often to using reusable cups -  there's plenty of simple changes you can make.  More information from Wiltshire's website.

Thanks to everyone who was using the facility - we've been making a difference, however small.  The centre relies on volunteers to take away and re-distribute what has been collected - and on everyone to keep things need, tidy and manageable!  We are always happy to hear from anyone who would like to suggest anything else we could do - or to volunteer to help out with moving items on, once they've been collected.  Or if there's anything that you know that people throw away, but you could find a use for.......?

Since loss of nest sites is one of the primary reasons for this decline, it is vitally important to protect existing nest sites and to provide nest boxes to compensate for those often lost in the course of building renovations.  Working together with Salisbury and Wilton Swifts, nest sites in the village have been identified and boxes installed, including those

at the Primary School and St Laurence’s church. Monitoring is continuing this year, and it will be helpful to have any input from observations

​The mini-recycling centre was being well used = up until lock-down hit.  Unfortunately it is still closed, and will remain so until we are able to move recycled items on.  Watch this space for updates!  And in the meantime, if you are able to store your recycling at home, please continue to do so.  We will get up and running again.

Several consignments of plastic milk bottle tops had already been delivered to Riding for the Disabled in Wilton.  Also two loads of flower pots had been delivered to Stewarts' Garden centre for recycling - they are happy to take pots coded with '5' or '6'.  A large number of bras have been recycled to support 'Against Breast Cancer'.  1 kg or print cartridges have been posted off to support the British Heart Foundation.  Empty toothpaste tubes and old toothbrushes have been taken to 'New Forest Live at Home'.  We were also able to accept CLEAN and DRY pet food pouches to be taken to a Terracycle drop off point.

It has been a good year for apples, with many people being able to harvest more than they could eat.  Earlier in September, the Green Group ran a juicing service for those people who had a surplus to turn into apple juice.  Slots were booked in advance and strict safety guidelines were in place.  And several bottles of delicious apple juice went home with our satisfied customers, making good use of apples that might otherwise have gone to waste.

Did you give it a go? 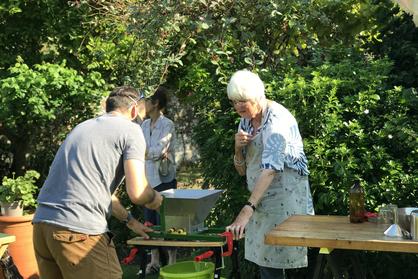